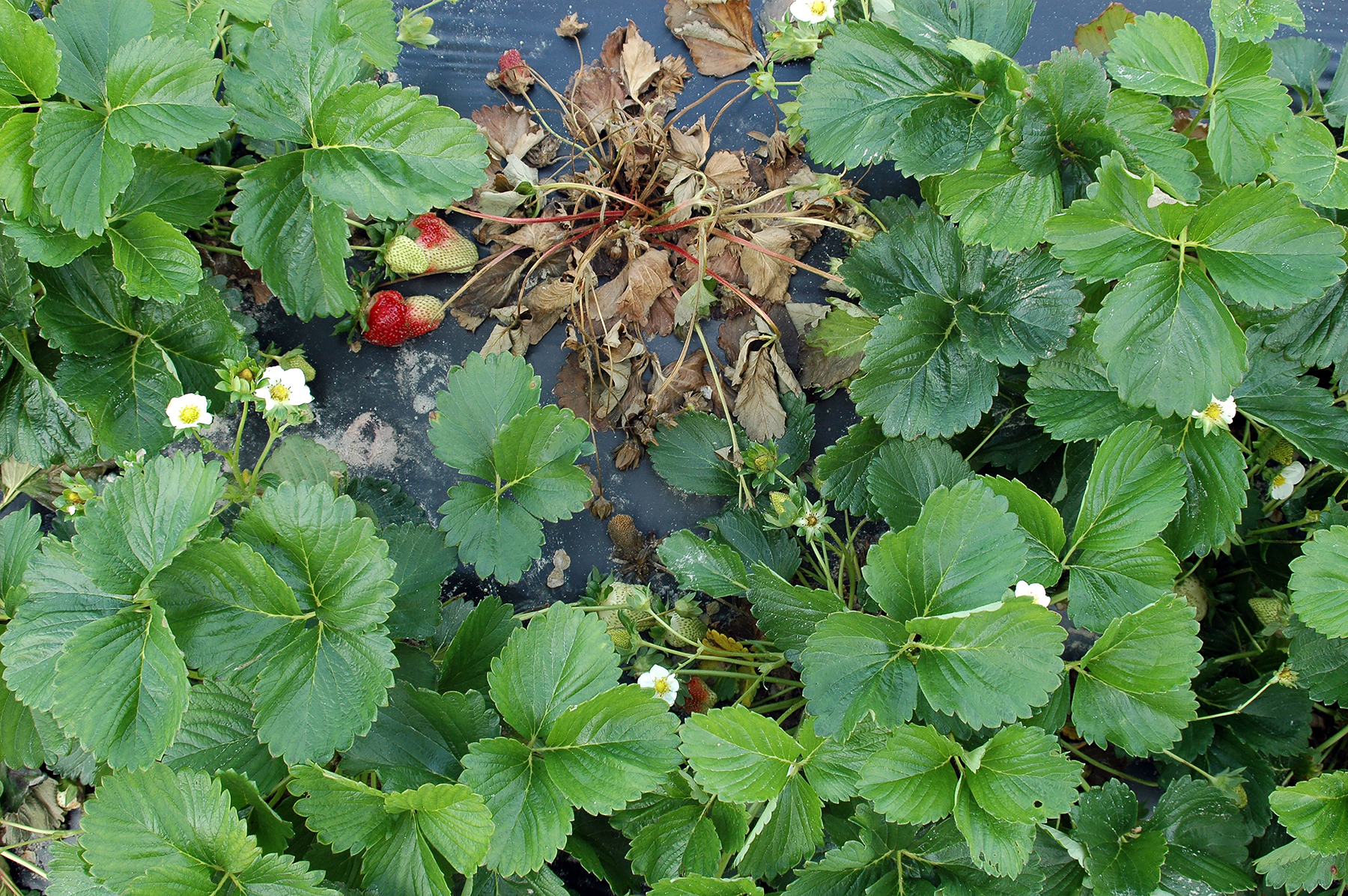 Anthracnose fruit rot (AFR) is the most destructive disease of strawberries. Although inoculum sources for fruiting field plants can be diverse, nonsymptomatic infected (quiescent or latent) planting stock is one of the most important. Thus, the best way to control AFR is to prevent the introduction of the pathogen into the field by using latent infection-free transplants. The evaluation of plants for latent infection is critical to ensuring there is no pathogen introduction, and it must be a reliable and an easy-to-execute diagnostic method that can be carried out at each step of the production system, such as at the nursery, the plug production facility, and in the field at fruit set. As latent foliar infections are not active, likely due to the presence of preformed antifungal compounds in host tissues, activation of induced resistance or a complex series of physiological and biochemical interactions between the pathogen and the host, special protocols (morphological and molecular or combination of both) need to be followed for their detection.

Morphological: Current methods for detecting latent infections rely primarily on either of the following bioassay techniques: 1) surface-sterilized foliage is killed by dipping in herbicide gramoxone (Paraquat), or 2) by freezing, followed by incubating senesced foliage inside a humid chamber to enhance sporulation. The tissue surface is then evaluated for the presence of the pathogen. The primary disadvantage of these assays is that they rely on the sporulation of the pathogen. The tissue samples are generally incubated for 7 to 10 days to allow for sufficient acervular growth to be visible, which results in a time-consuming assay. Also, sporulation may be inhibited by previously applied fungicides or by the surface disinfestations common to these assays, thus creating a potential for false negatives. However, if the disinfestation steps were to be removed, the growth of contaminating organisms such as Botrytis, Gnomonia, or Phomopsis would obscure the results (Rahman et al. 2019). Even after 7–10 days of incubation, acervular growth can be very small and thus a stereo microscope or magnifying lens is used to visualize the growth, which is normally of peach or salmon color. A slide mount can then be prepared to study spore morphology under a compound microscope. C. acutatum typically has acute ends, while C. gloeosporioides has round ends with a cylindrical appearance. However, these two species are now considered species complexes, and delineation of species under each complex can only be done by multilocus (ITS, ACT, TUB2, CHS-1, GAPDH, HIS3) molecular phylogenetic analysis of isolates (Damm et al. 2012).

Molecular: DNA based methods are faster and can overcome some of the disadvantages encountered in morphological diagnosis. DNA can be extracted directly from suspected green tissues that can be subjected to a PCR or a real time PCR protocol by using Colletotrichum specific primers. In case two major species acutatum and gloeosporioides are present together, those can be separated by running a post-amplification high resolution melt curve analysis (Rahman et al. 2019). As only a minor portion of foliar tissues can be used for DNA extraction, most of the leaf areas are left out of the sampling. In addition, DNA from dead inoculum can also produce amplicon producing false positives for fruit AFR risk analysis.

Combination of morphological and molecular (Bio-PCR): To increase the sensitivity of PCR, an initial step with short incubation of processed sample is recommended to multiply the level of inoculum.


Have a question about P&V Tips? Want to see a specific article? Contact lina@iastate.edu