Tips for the purification of fungi and oomycetes

Tips for the purification of fungi and oomycetes

Producing single-cell, single-spore, or monosporic cultures of microorganisms, including bacteria, fungi, and oomycetes, is a standard practice used in research. These methods ensure isolation of an individual species and not a mixture of multiple species. This often tedious, time-consuming task is not commonly used in diagnostic settings; however, pure cultures aid in accurate identification of isolates whether using morphological or molecular methods. While the practice is standard, many methods, tools and variations have been developed over the years.

This article will focus on published methods used for single-spore and hyphal tip purification of fungi and oomycetes with descriptions of some known variations. [Insert Read More Link Here] While many methods have been published, various unpublished methods and adaptations are likely being used in plant pathology and microbiology labs.

Pure culture methods are divided into three categories for this article:

1. Dilution of spores in aqueous solution or liquifiable culture media:

Making the diluted spore suspension:
The most common single spore method involves first diluting spores in a liquid, typically sterile water; however, suspending organisms in liquifiable culture media and pouring the solution into plates to solidify has also been described for bacterial and fungal isolates (Hansen and Smith 1932; McNew 1938).

Spores for the dilution methods are generally collected from clean cultures although spores can be collected directly from host material or fungal fruiting structures. Breaking open fruiting structures such as perithecia or pycnidia or agitating material to release spores into the suspension may be necessary (Choi et al. 1999). To optimize the spore concentration a serial dilution method can be used, or a simplified method involves adding a small amount of the culture or fruiting structures to the liquid and examining a drop under the microscope to estimate the concentration and adjust as needed (Booth, C. 1971; Hansen and Smith 1932). A hemacytometer can also be used to measure concentrations more accurately.

Additions to the spore suspension:
Adding lactic acid to conidial suspensions limits bacterial contamination and the addition of Tween 80 reduces clumping of spores (Leslie and Summerell 2006). Other additions or treatments may be required depending on the specific organism. For example, the oomycetes Phytophthora, Pythium or downy mildew pathogens may need to be chilled to release zoospores (Hall 1959; Ho and Ko 1997; Spring 1998).

Dispensing the spore suspension:
Various methods have been described for dispensing the suspension to enable the location and selection of individual spores. Typically, the suspension is spread on Petri plates containing solid culture media such as water agar or another suitable agar for spore germination. Alternate methods include forming a thin agar slab on a cover slip or slide (Leslie and Summerell 2006; Lv et al. 2021). The spore suspension can be streaked across the agar using a loop or deposited with a pipette and spread across the plate using a glass hockey stick or L-shaped bacteria spreader or by simply tilting the plate (Leslie and Summerell 2006). Tilting the plates is a recommended method for zoospores to prevent damage by mechanical spreading (Hall 1959). The agar plate can also be flooded with a dilute spore suspension and the excess liquid poured off leaving some spores stuck to the agar (Onions et al. 1981). Other methods include cutting small circles (2-3 mm) into the agar using glass tubing or labeling the bottom of plates with circles or a grid pattern. Small volumes of the spore solution are deposited onto each circle or grid section. The locations with only one spore can be marked and then transferred to a new plate (Choi et al. 1999; Ho and Ko 1997; Tuite 1969).

Incubation:
Spores can be located and transferred immediately, or they can be incubated, often in the dark, until they begin to germinate. The use of agar plates prepared a few days to a week in advance can be beneficial since the media will absorb the liquid more quickly and spores will be less likely to move around (Leslie and Summerell 2006). Allowing spores to germinate guarantees the selection of a viable spore; the germinating hyphae also anchors the spore as it is being cut and transferred (Tuite 1969). Fungi vary significantly in their germination time and can take anywhere from a few hours (overnight) to 1-2 days depending on the species. When adding components such as lactic acid to the spore suspension or antibiotics to the agar, spore germination can be delayed.

Isolation and transfer of spores:
The main objective is to select only one spore and the hyphae from that spore and not a clump of spores. This is especially difficult with species that produce small, hyaline spores that cannot be easily observed under the dissecting microscope. Germinating spores can be located using the dissecting scope then excised using a thin scalpel, such as a #11 feather scalpel, or a thin spear-shaped tool (fine dissecting needles). Dissecting microscopes with a bottom light in the base can aid in locating germinating spores.

A more precise method involves cutting out or marking the spores under the compound microscope to ensure a single spore is selected. Locating the spores on the surface of the media can be challenging. Scraping or scoring the surface of the media and then focusing the microscope on these marks can assist in locating spores which should be in-focus on the same plane. Once located, marking the spore's location can be done using a micromanipulator which can be used to move spores to separate them and can be used to lift spores or score the media around a single spore so it can be excised under the dissecting microscope (Hildebrand 1938, 1950; Leslie and Summerell 2006). Micromanipulators are often expensive; therefore, simplified methods and tools are described below.

Single-sporing tools:
These simplified methods include very fine needles made from wire or pulled glass, small biscuit cutting tools and other isolation tools that can be used to cut or mark the agar around single spores for removal. Many of these tools are reviewed in Booth 1971, Goh 1999, Hildebrand 1938, 1950, Tuite 1969, and Onions et al. 1981. These references provide some instructions for making your own tools. The La Rue cutter, invented in 1920 and modified by Keyworth in 1959, replaced an objective on a compound microscope and was used to cut out or mark a small area around a single spore but unfortunately these tools are no longer commercially available.

One tool that has been used in the Penn State Plant Disease clinic is a very small wire called a #6 K-file used by dentists for root canals that can be inserted into a plastic 1-ml pipette with the top cut off (Figure 1). This tool can be used to mark the media around a single spore under the compound microscope so it can then be identified and transferred under the dissecting microscope. The K-files can be found through online retailers. These tools are also very useful for picking up nematodes. 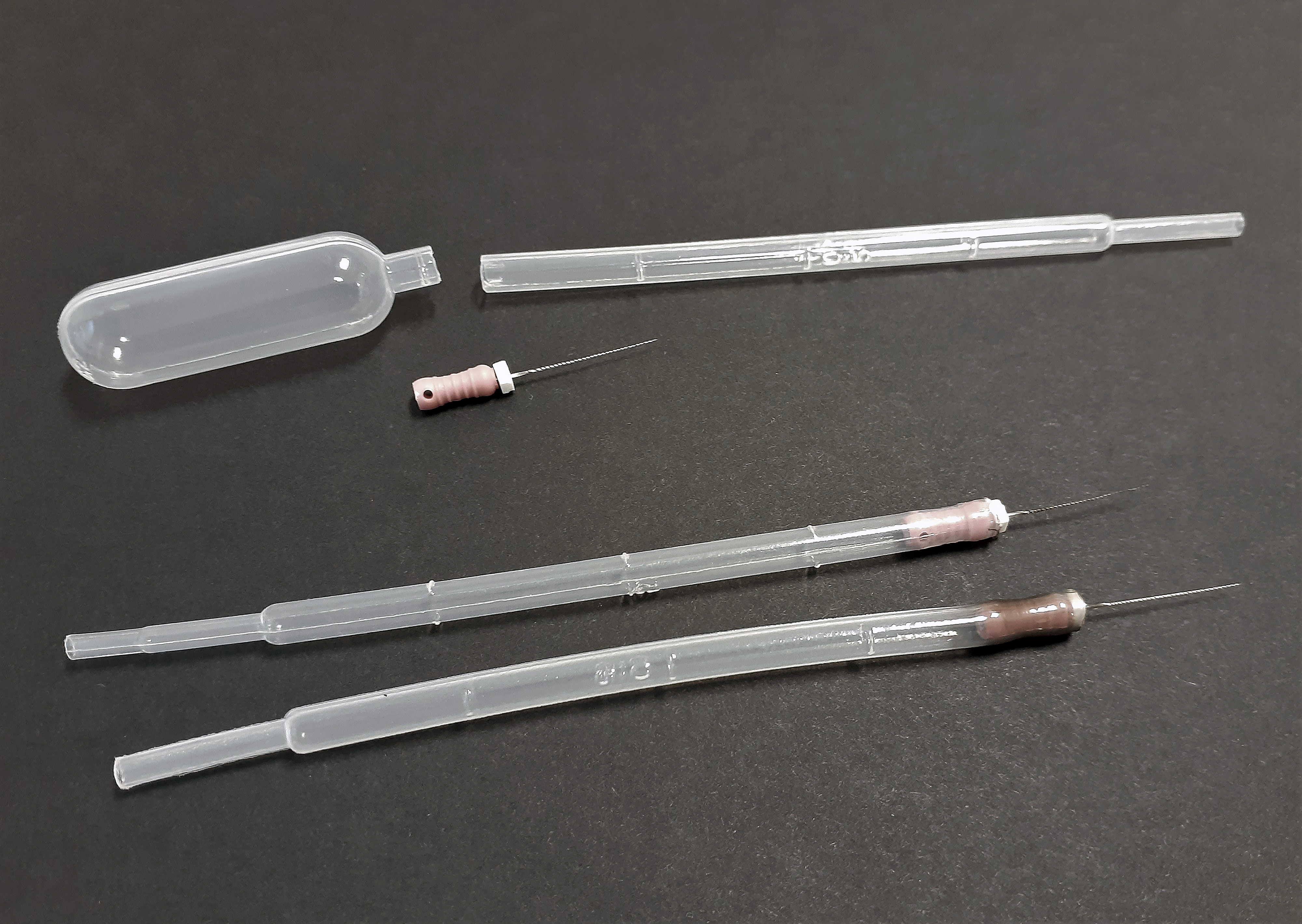 Figure 1. Single-spore tool made from a plastic pipette and #6 K-file dentist tool.

Organisms with large spores such as powdery mildew can be picked directly from host tissue using a micromanipulator, a small needle, or even an eyelash (Seifi et al. 2012; Miles et al. 2012). Immersing the lower portion of Sclerotinia apothecia in alcohol or applying alcohol to the apothecia induces ejection of the ascospores directly onto media for single-spore isolation (Tapke 1946). Tuite 1969 also describes techniques for picking spores directly from cultures or host tissue and transferring to media or detached leaves.

Hyphal tipping involves cutting out the tip of a single hyphae growing from a colony. Hyphal tips can be cut out under the dissecting microscope or under the compound microscope for more accuracy. Werres 2015 describes two hyphal tip methods used with Phytophthora. Hyphal tip methods can be useful for sterile mycelia isolates or those that do not grow well from single-spore isolations. Hyphal tip methods are also useful for instances where mutant colonies develop from single-spore isolations or when cultures are contaminated (Leslie and Summerell 2006; Nelson et al. 1983; Onions et al. 1981).